The families of Killman Zoo 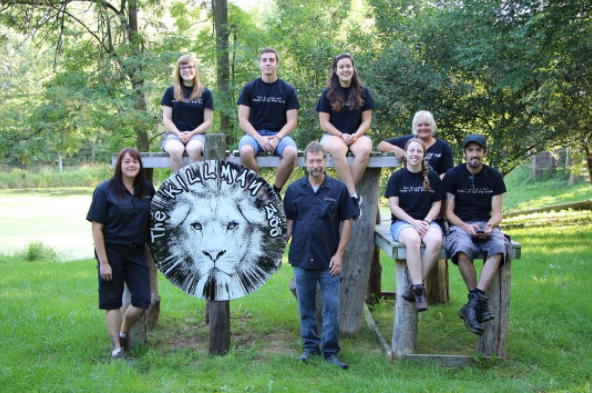 06 Jun The families of Killman Zoo

Posted at 14:10h in Killman Zoo by GraphixFlo
2 Likes
Share

One of the greatest things about the Killman zoo is that it is family driven. Yes, by visitors… but that’s not what I am talking about. Not even the wonderful people there everyday (owners, employees, volunteers)… but the animals themselves. Every animal there has a story to tell – they are apart of the Killman zoo animal family that has been around for generations and generations. Within the zoo, you can find grandparents, brothers, sisters and parents. With all the bonds we may have with them, their bonds with each other are so much stronger. It is truly a wonder to see.

This year, our lion pride has reached 14 individuals. Laurel and Hardy, born in 2015, are cubs of Naomi and Lex Luther (who have been at the zoo for most of their lives).  These two boys are brothers, and best friends. They do everything together… monkey see, monkey do. Like there parents, both are very gentle boys. Because of this, Laurel and Hardy were handled significantly longer than other cubs and now at 2 years old, are still the most gentle out of the whole adult pride.

Solitaire, now at 2 years old, is similar to her younger brothers Laurel and Hardy. She was a solitary cub from Lex and Naomi and tends to also be on the gentler side. Solitaire is a very sweet girl, but also a huntress, who you will always find peaking at you from around her play structures. She always tries to catch you by surprise. Since she was a little cub, Solitaire has always favoured the boys – both human and lion alike. She shares a playground with Jose and Harry Callahan (brothers), and is quite lovey-dovey with them as well as our male keepers.

Jose Wales and Harry Callahan are the kings of the woods. They, like their father (Colossus Maximus), tend to be more serious and always on the watch. That being said, as brothers, they can be extremely playful as well. We call them the acrobats because while playing they are constantly jumping over each other and on each other’s backs. They are certainly a joy to watch.

Our newest little lion pride consists of Pearl, Aero, and Oscar. Pearl and Aero are white lions (the first ever at the Killman Zoo!). Oscar was born this past August at the zoo. Pearl is one month younger than the boys. It has been incredible raising the three cubs as each is so unique but incredibly bonded with each other.

Oscar is the head-hauncho and since 2 months old he has been the pride leader. He was always the first to explore and to be followed by the other two.  If ever his little pride were out of sight, he would call until they came… and they always did. Although 1 month younger than Aero, Oscar was always the first to reach milestone moments, such as pooping and peeing on his own, drinking out of a dish, and eating meat.

Aero, our oldest white lion cub, is the most laid-back lion you will ever meet. He is such a “suck”. He is very sweet and has always been a cuddler. For months, you could pick him right up and carry him around for 10 minutes without any fuss (this is a long time to carry a lion as I’m sure you can imagine!). Now at 7 months old, not much has changed except it is very difficult to carry a 70 pound lion, let alone for 10 minutes. Of course from time to time he gets that possessive instinct (especially around pillows), and can be scary serious. But compared to Oscar and Pearl, that rarely happens.

Pearl is quite something. We got her at only a couple weeks old and she was our little princess. But now at five months, she is definitely no princess…she is the queen. Although small, what Pearl lacks in size, she gains in bite. She is a true lioness through and through – a huntress, always stalking and practicing the hunt (a females duty in the pride). Pearl is feisty and playful. Lion cubs learn the practice of hunting through play with their littermates or other cubs in the pride. But like the other two, Pearl also has such a sweet side and can occasionally be seen giving everyone a hair “bath” (especially Mark, and our Newfoundland dog, Oliver!).

This is only a short summary of our younger eight lions but there are so many more stories behind each one and the families that they share. If you’re interested in hearing more, come chat with us at the zoo! We are always walking around and would love to share our family’s stories with you.Killman Zoo