Come watch our Snow Monkey family, who are proud to introduce the newest addition to the family, Licoric, who was born this past Spring. Just like other macaques, our Snow Monkeys love the water and you may be lucky enough to see them playing in their bath. Cracker Jack, the 2 years old female, is always curious and loves to come up close for peanuts! Come see their characteristic swings and leaps in their rope playground. 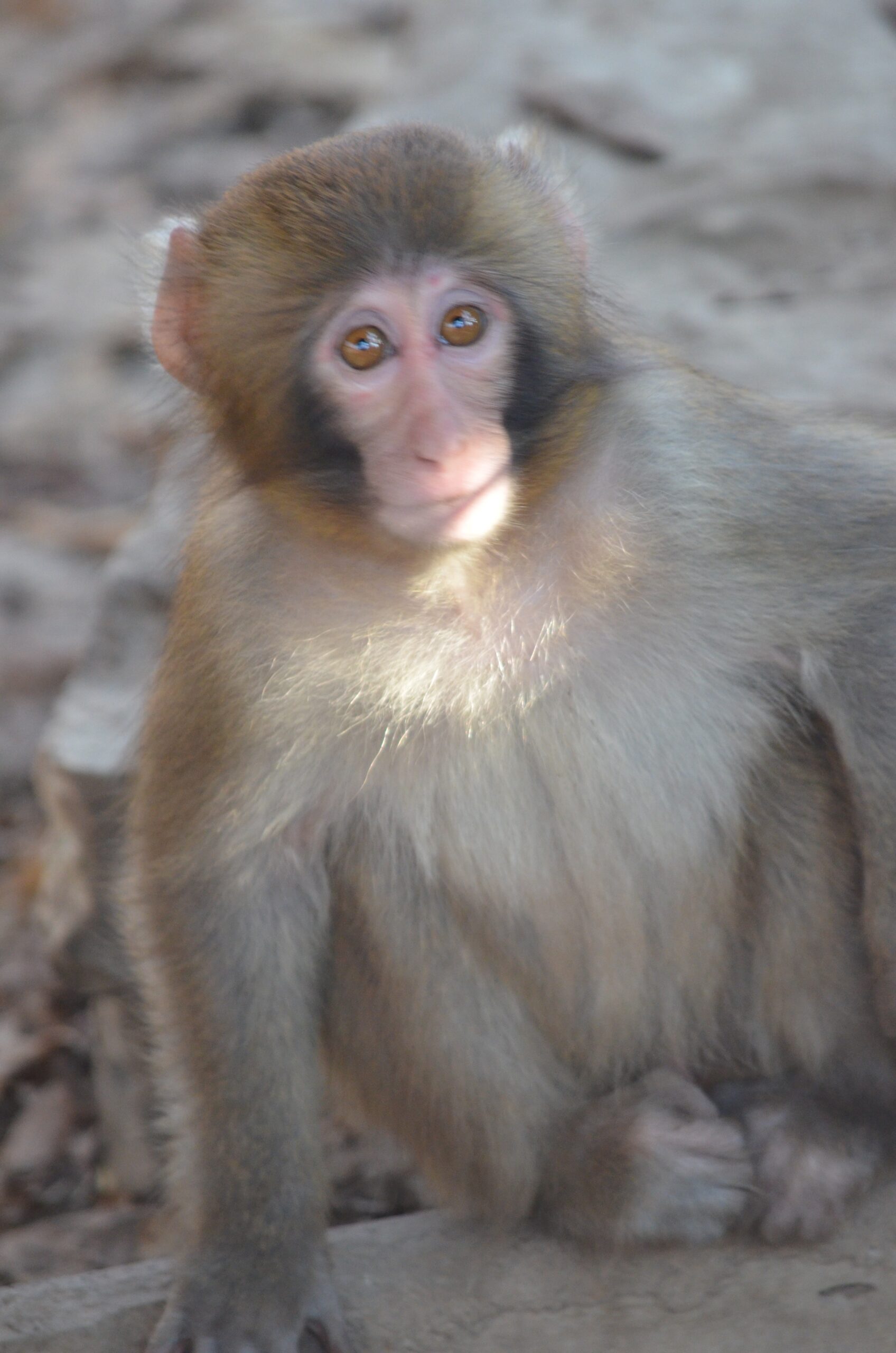 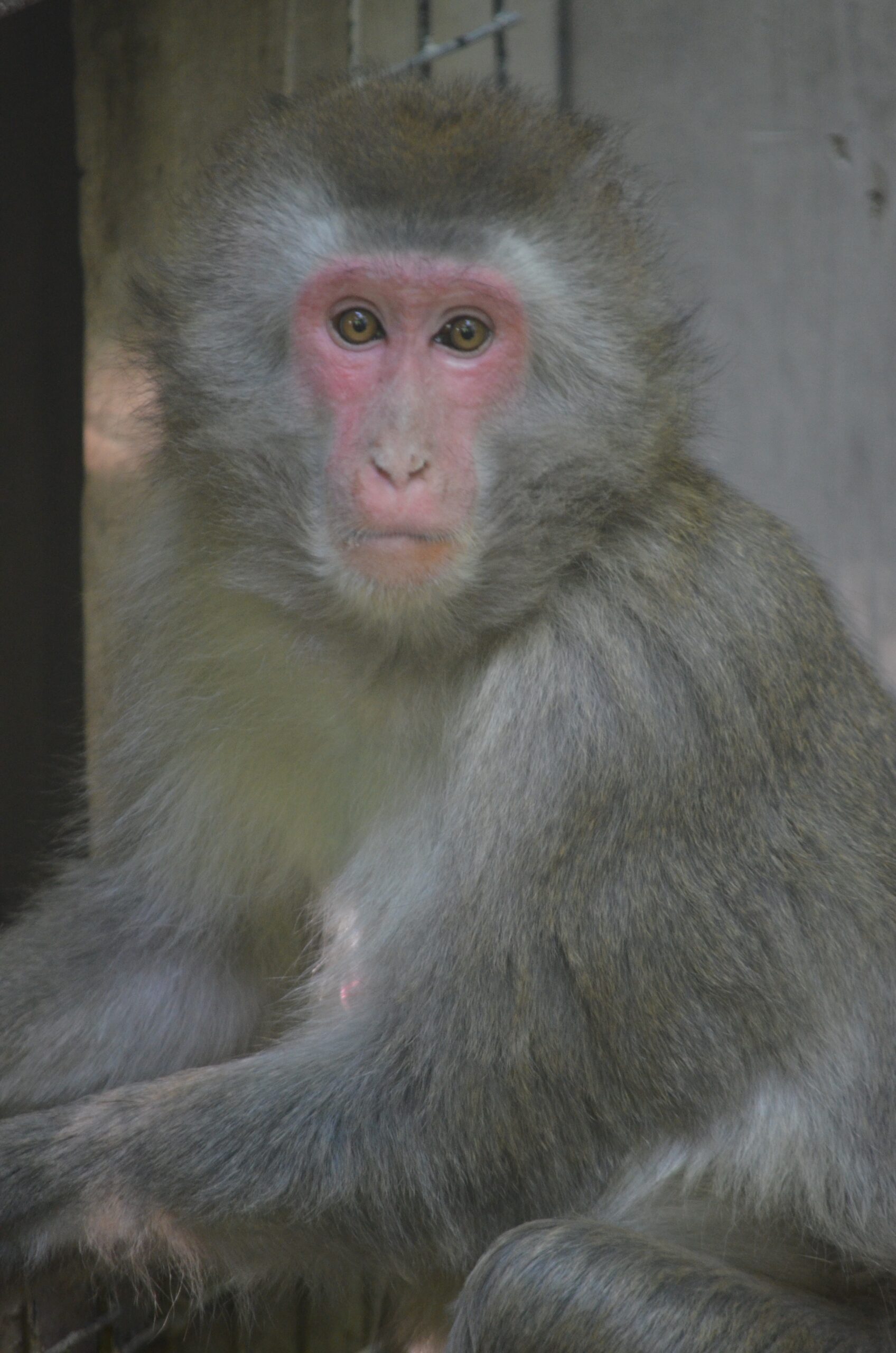 The Japanese Macaque, also known as the Snow Monkey, is the most northern-living primate besides humans. The species is sexually dimorphic with males being larger than females. They are semi-terrestrial, spending time on and above ground. They are extraordinary leapers and great swimmers. Their favourite spot in the wild are hot springs where each individuals place within the spring is dependent on their social status within the group. Being an omnivore, snow monkeys eat a large variety of foods such as fruits, leaves, seeds, insects, bark, and nuts.

Come meet Stanley, Alice, and Zehra down in the woods – our family of Olive Baboons. Alice, their 3 year-old daughter, is quite the rascal who is always seen leaping between their tree platforms. Stanley, the leader of the little troop, keeps a watchful eye on all the goings-on within and out of his enclosure. In his typical “Stanley pose”, he sits with his hands on his knees watching Alice’s antics. Zehra, the mother, hangs with Stanley and is often seen grooming him. 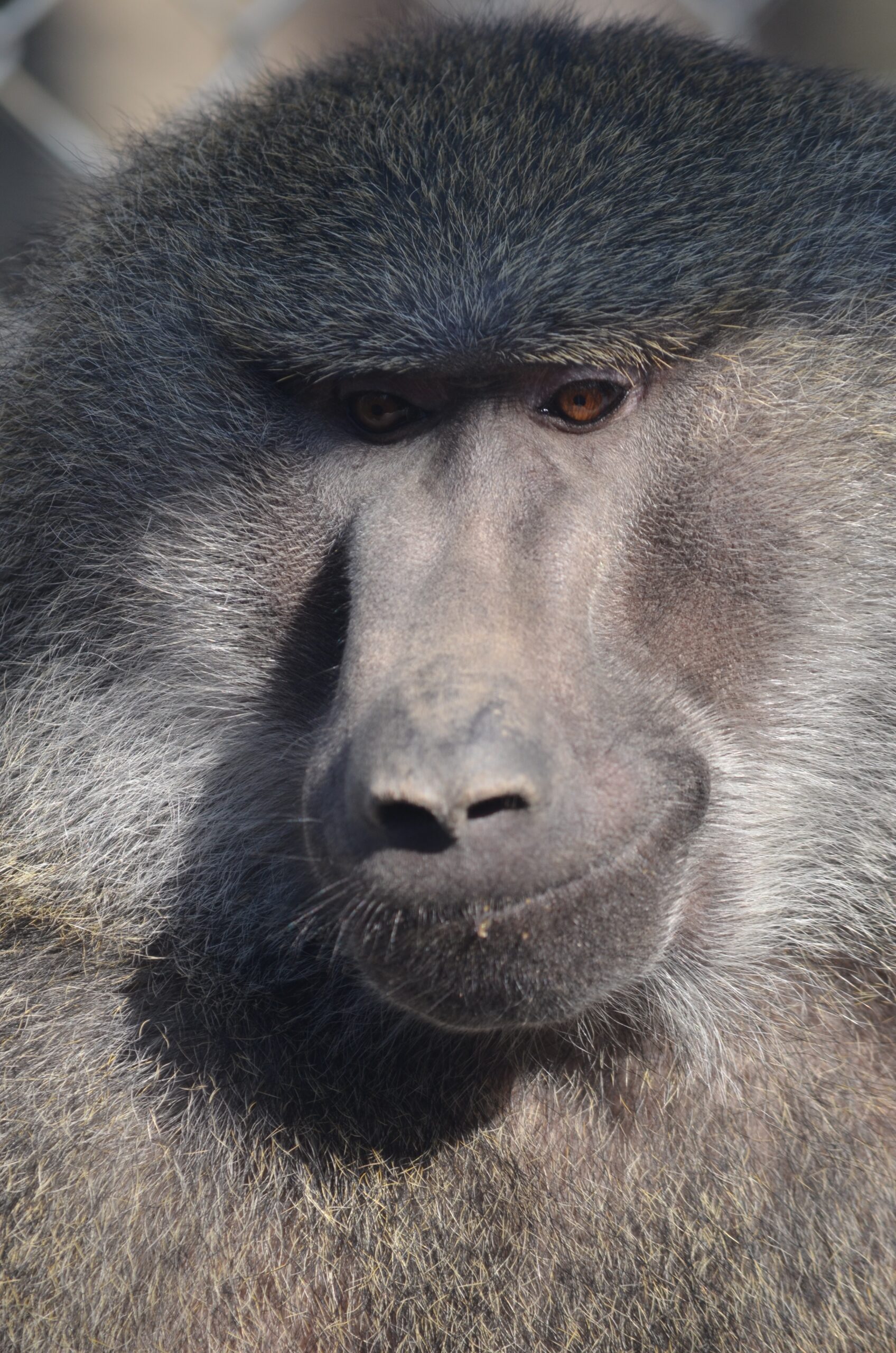 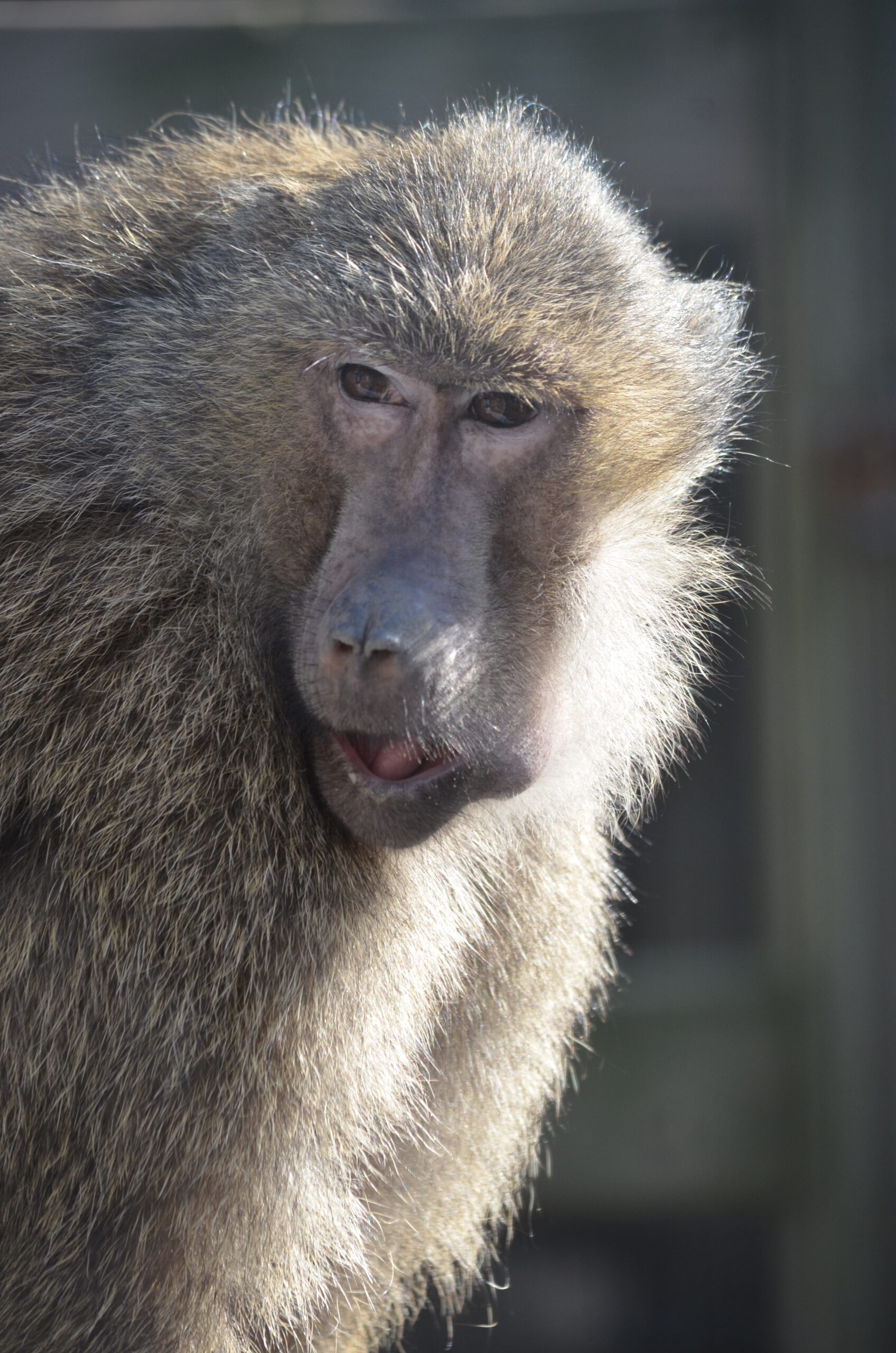 Part of the Old World Monkey family, the olive baboon is one of the most abundant, wide-ranging baboons in all of Africa inhabiting 25 of its continents. Also called the Anubis baboon, because their nose is dog-like compared to the Egyptian god Anubis. This species lives in a range of habitats including forests, steppes, and savannahs. Groups of baboons are called troops which could contain anywhere between 15 to 150 individuals, each with their own social ranking depending on dominance. Baboons are omnivorous eating a wide variety of foods including vegetation, fruit, insects, and various small mammals.

A memorable monkey due to his many facial expressions, Bongo is quite the character. Dependent on your gender, your experience meeting Bongo may be different than others. Typically, Bongo loves the ladies and is often seen making kissy faces with them. On the other hand, if you’re a man, Bongo may show you up with displaying his fabulous set of teeth indicating a display of dominance. 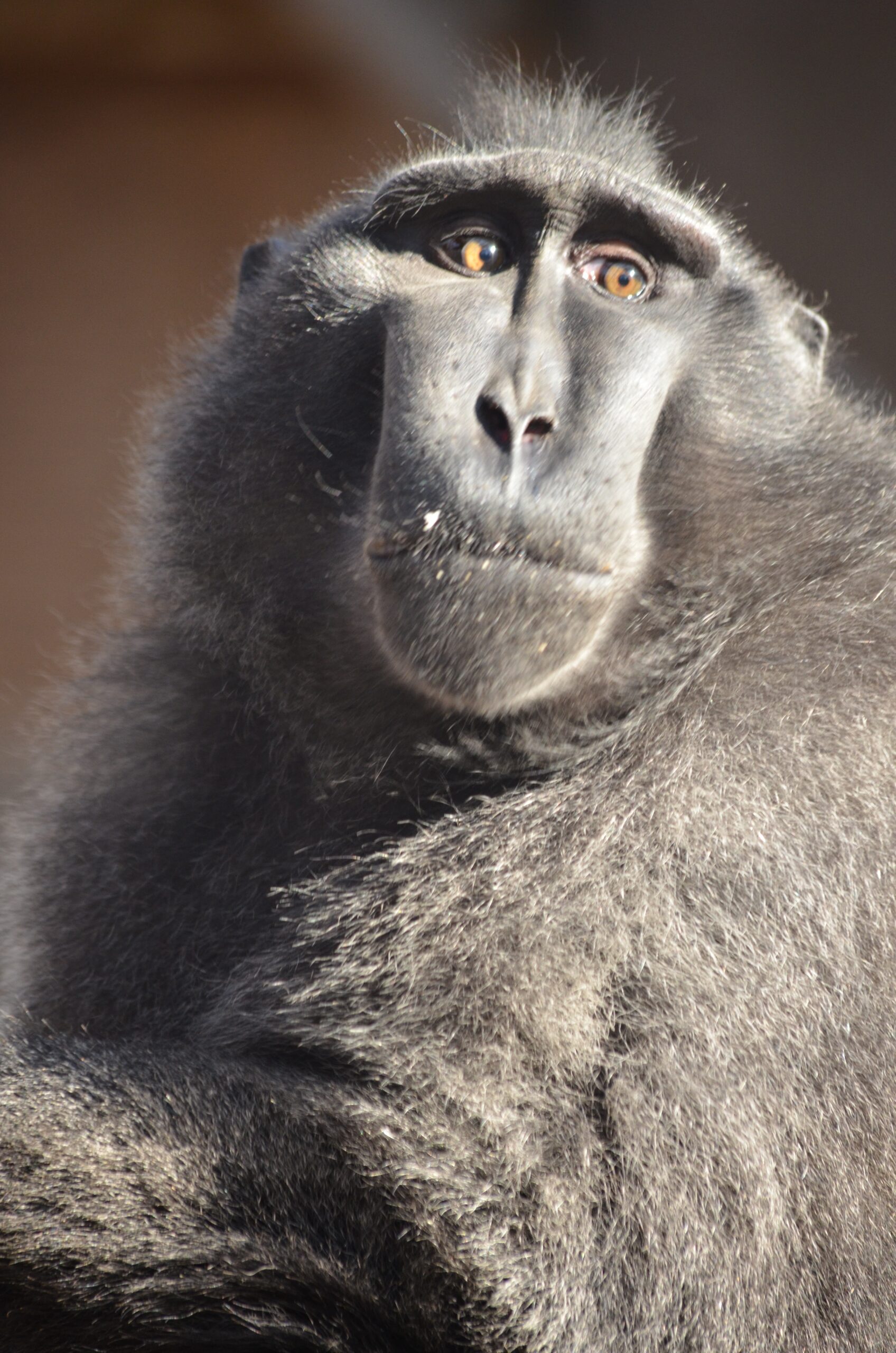 The Celebes crested macaque is an Old World Monkey which inhabits part of Indonesia. This small monkey has both jet black hair and skin, along with its almost non-visible tail giving an apelike appearance. Most of its time is spent on the ground foraging for fruit, leaves, seeds, and insects. The macaque lives in groups with a ratio of 4:1 females to males, with both sexes being promiscuous.

The ring-tailed lemur is an endemic species from Madagascar and typically lives in the more southern regions of Madagascar. They are mostly known for their alternating black and white rings on their tails, hence their names. They are an omnivorous species and the most ground dwelling of all the lemurs, spending around 40% of their day on the ground foraging for food and other goods. They are a very social species, and can be seen in groups of up to 30 living together in the wild.
Our ring-tailed lemurs (or “ringies” as we call them) Gin & Tonic are a big hit at the zoo, especially the babies Rocks & Lime. They are very playful and now that the babies are older they are starting to venture off away from mom and play. You might see them sunbathing on a nice day, as that is one of their favourite activities. Their favourite treats are dandelion leaves and grapes, although the little ones haven’t quite gotten the hang of eating them properly, especially with bigger grapes! 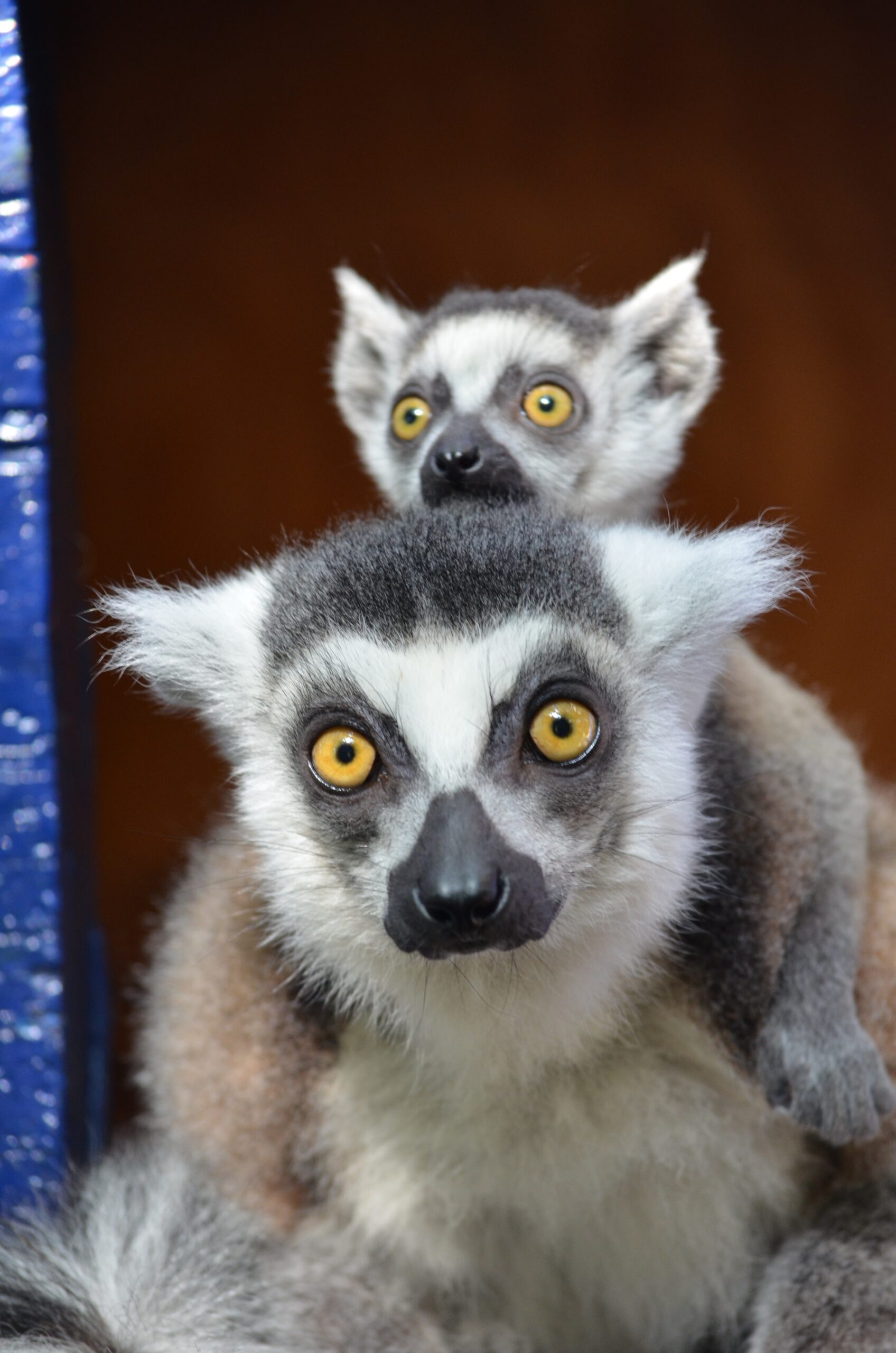 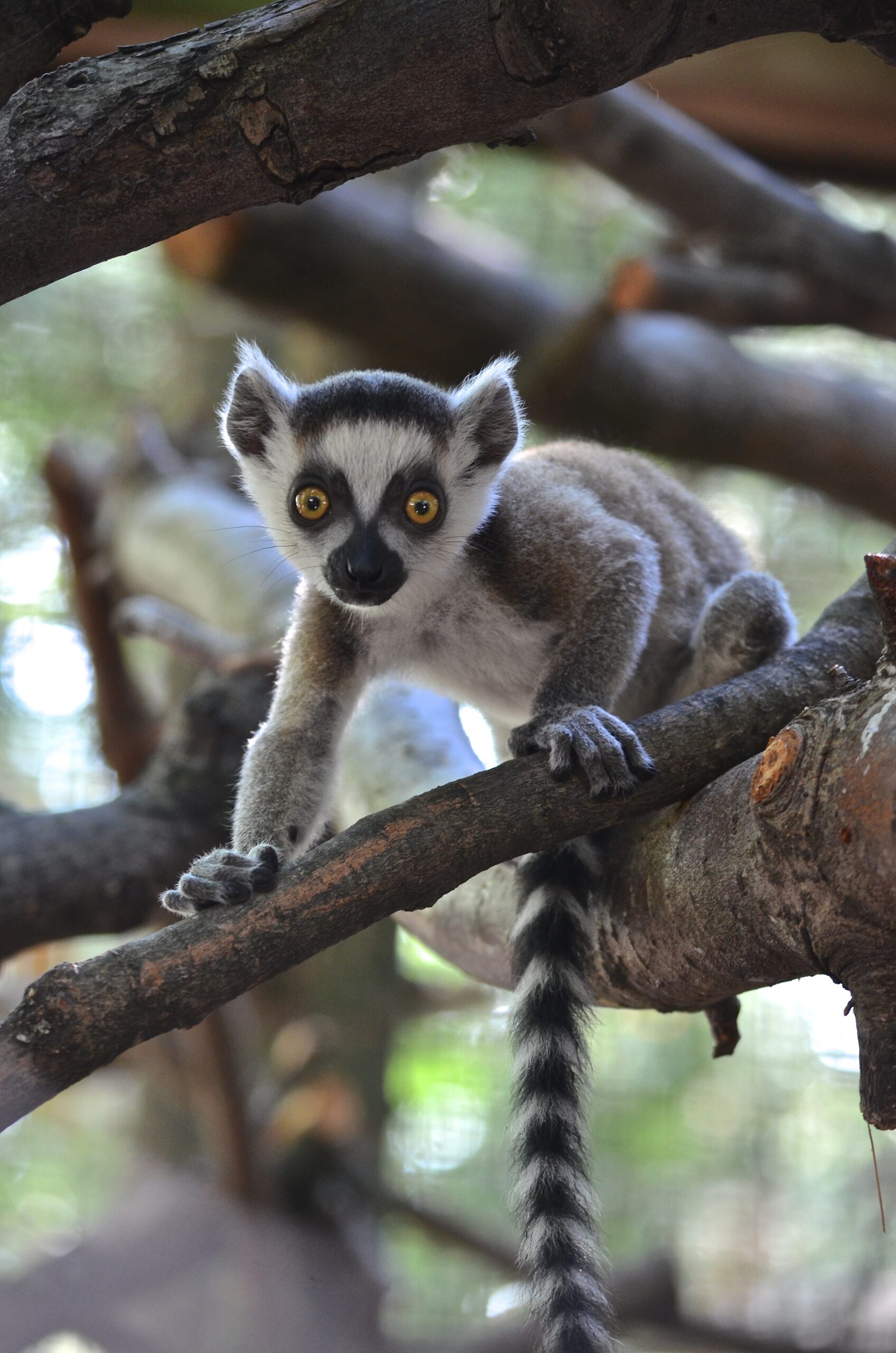 GINNY WITH ROCKS AND LIME 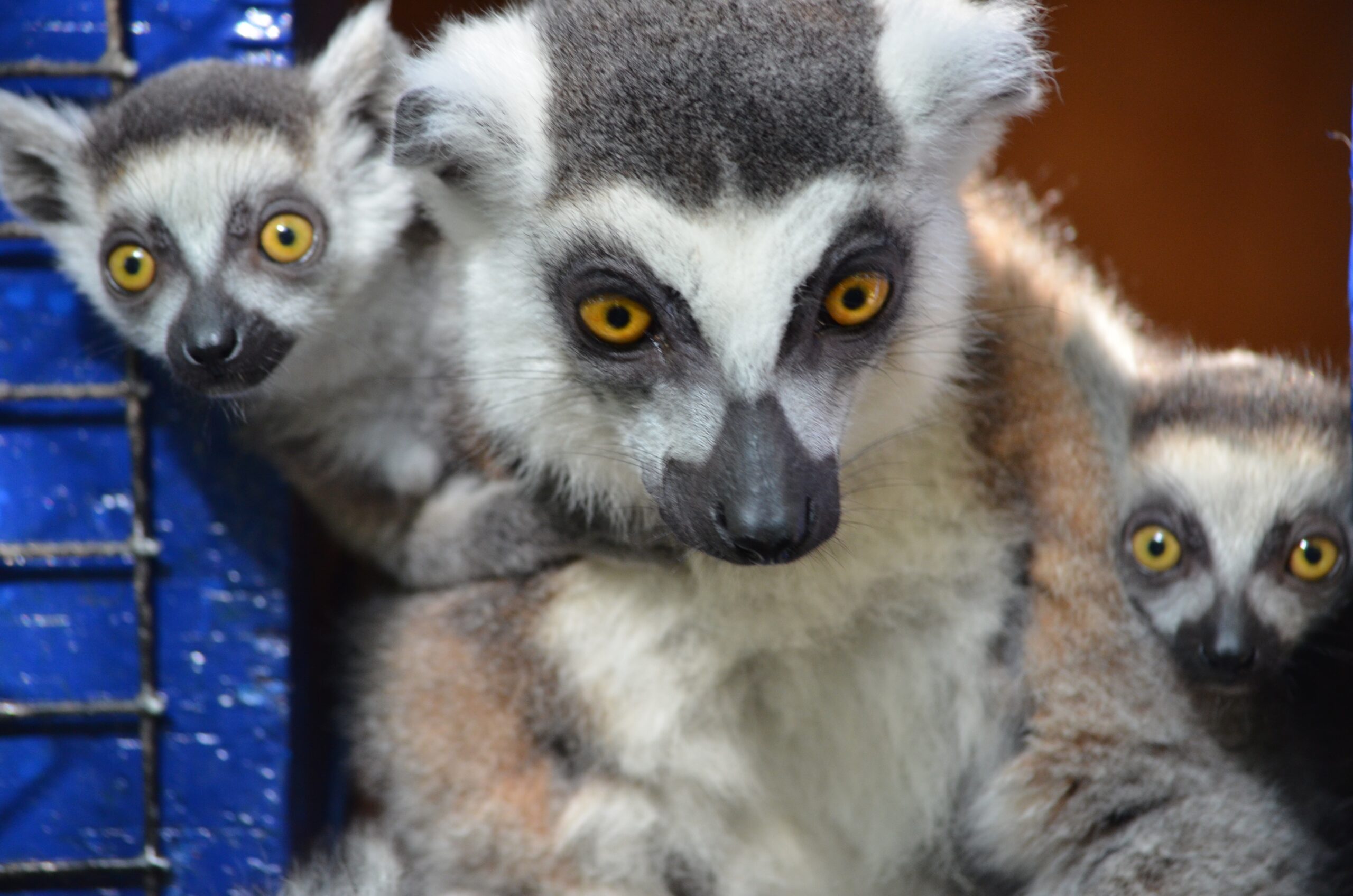 Endemic to Madagascar like all lemurs, black and white ruffed lemurs usually live in the eastern rainforests of Madagascar. They have a distinctive white fur crown around their face, and also carry more fur on their bodies than the ring-tailed and the blacks. They are more tree-dwelling and enjoy a more fruit based diet than the other lemurs. The ruffed lemurs are very vocal, and have a distinctive barking/roaring that they typically do to communicate to other lemurs, with different calls meaning different things.

We have 3 Ruffed lemurs at the zoo; Marco, Hans and Solo. Hans and Solo are mates, and the most vocal of the three. They have a distinct call and are very vocal as stated in the previous paragraph, so you are guaranteed to hear them while walking through the zoo. Marco is the friendlier of the bunch, and he loves receiving attention from the girls as well as scratches on his belly and armpits. 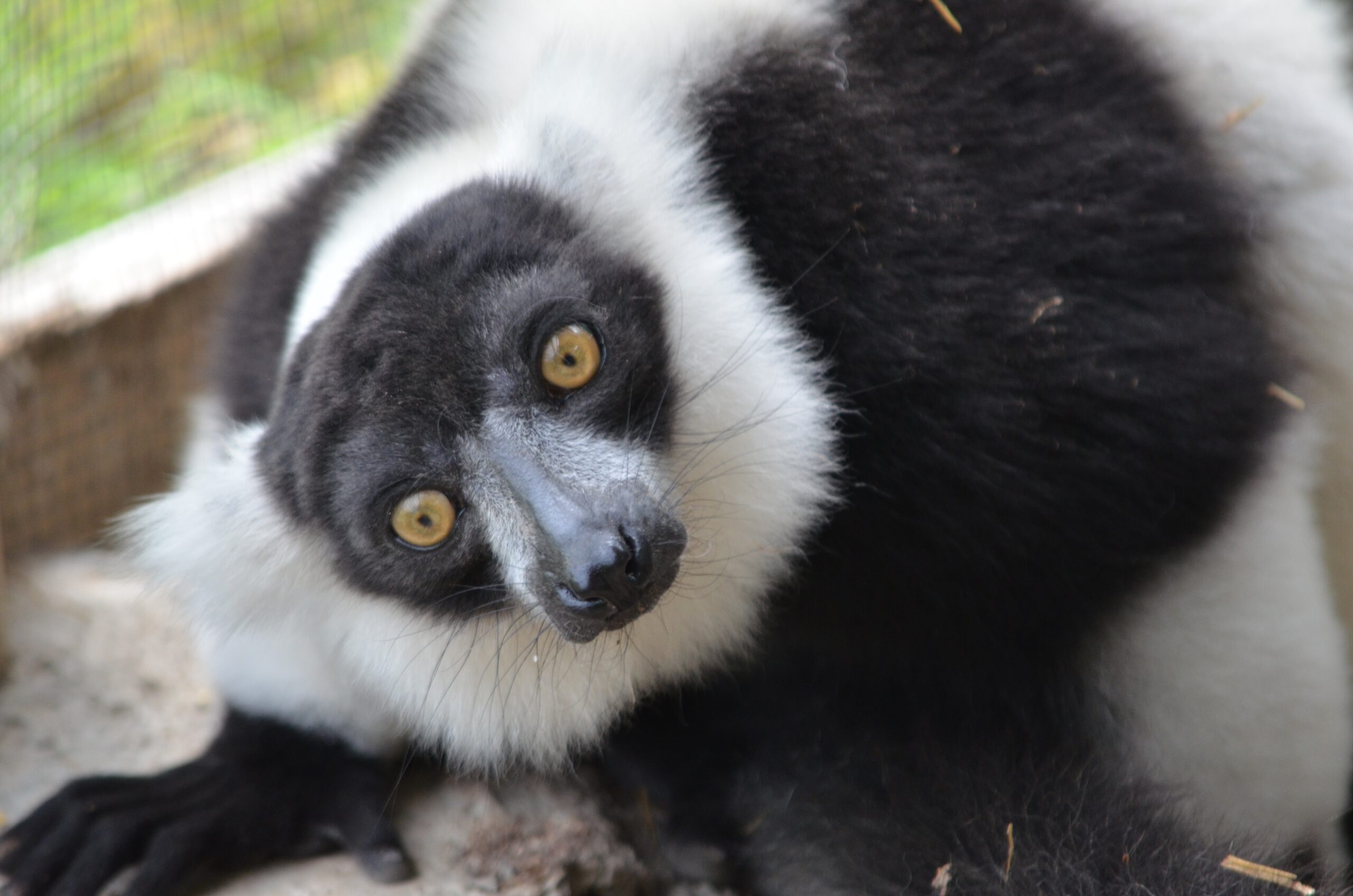 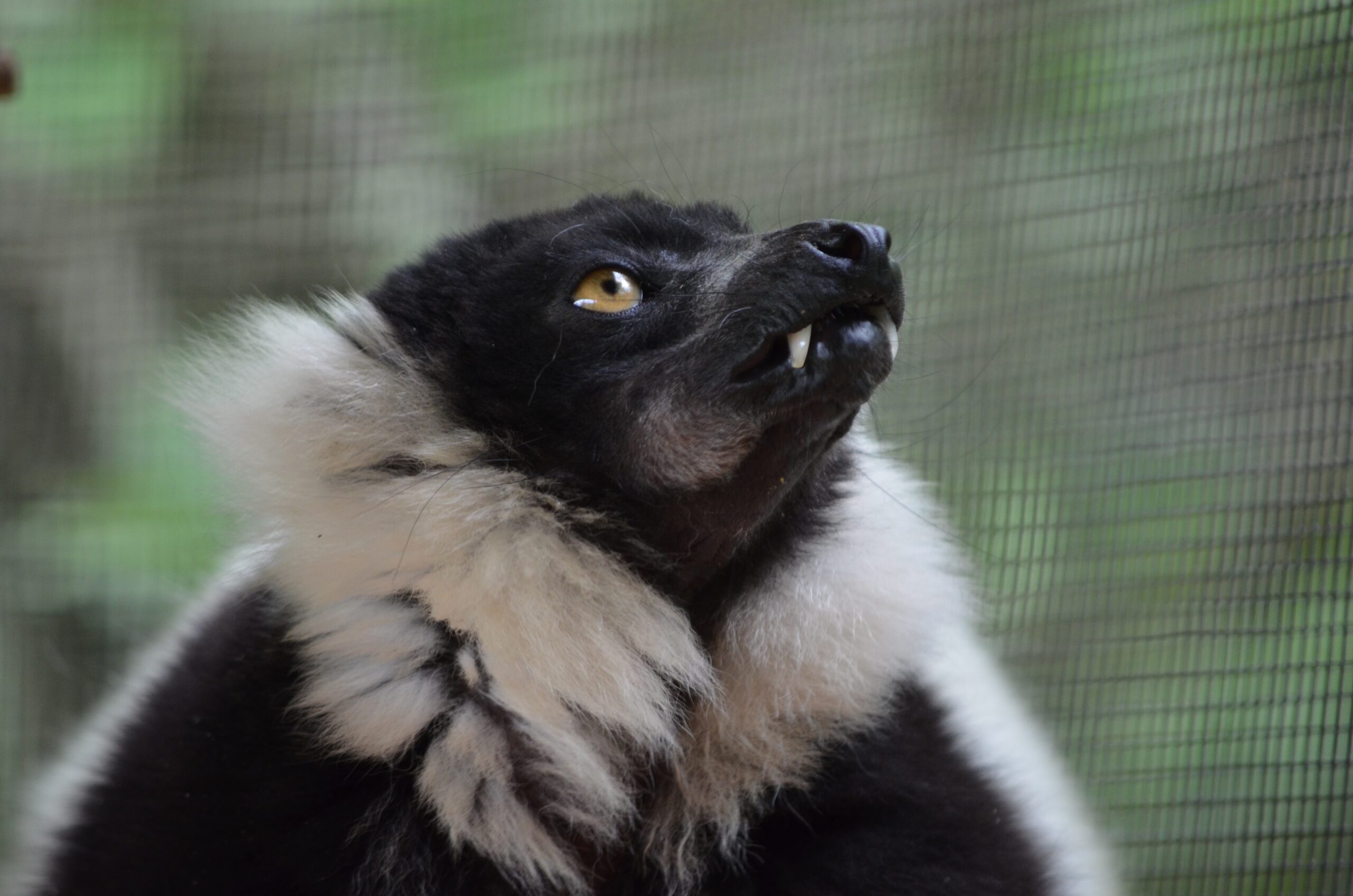 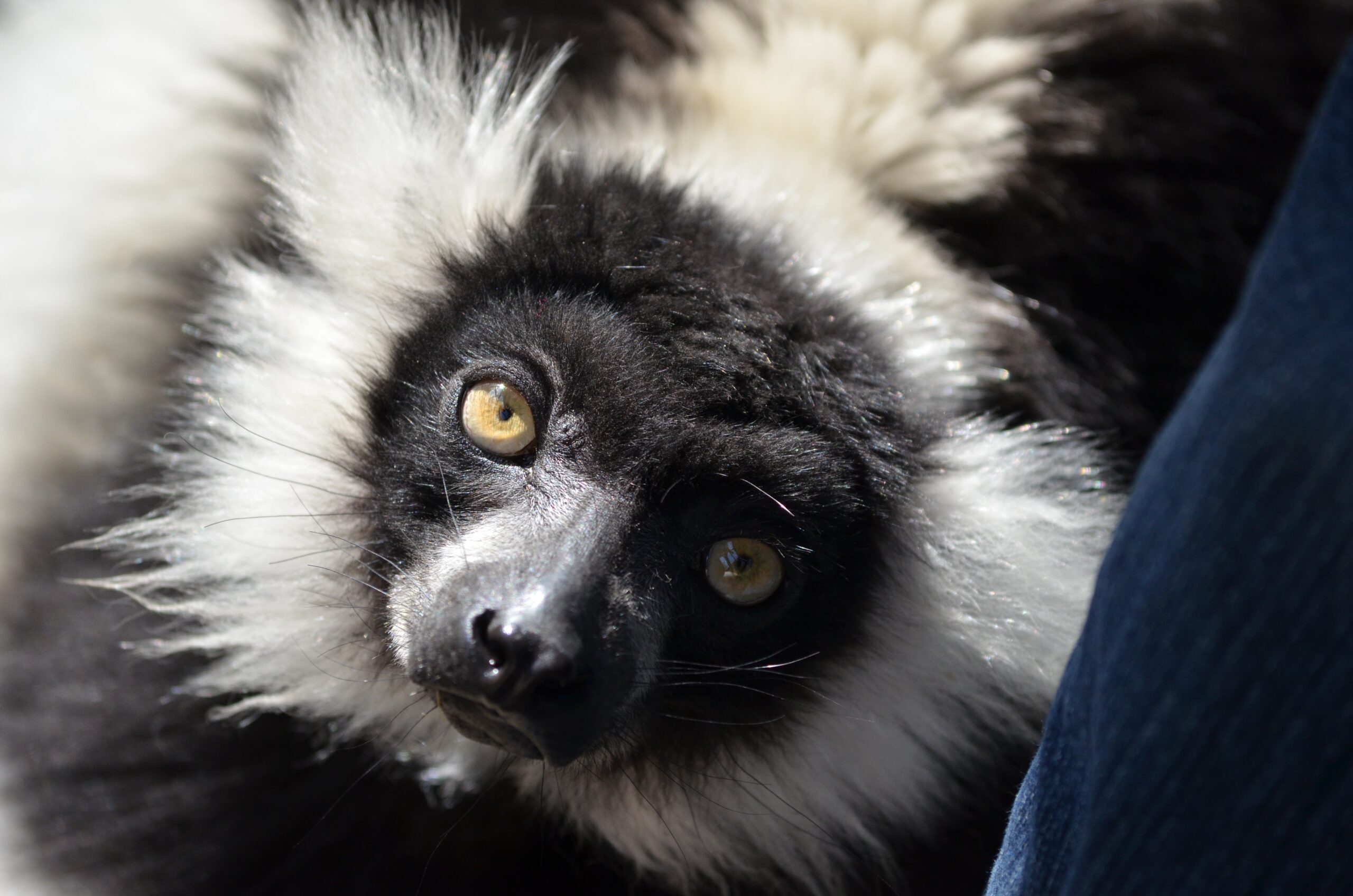 Black lemurs inhabit the moist forests of the north-western region of Madagascar. They are active just as much in the day time as they are in the night, and enjoy foraging in the middle and upper canopies of trees for fruits, flowers, and some invertebrates. They live in groups of about 10 with an equal amount of males and females, and females being dominant. Although not as prominent, they also have a lighter coloured fur crown around their faces.

Our black lemurs Buffy and Bellatrix have been companions for a long time at the zoo, enjoying each other’s company and sunbathing as much as possible. Although they don’t make sounds nearly as loud as our Ruffed lemurs, they are talkative and you’ll usually hear them communicating by making little grunting noises. Their favourite treats are apple sauce and grapes. 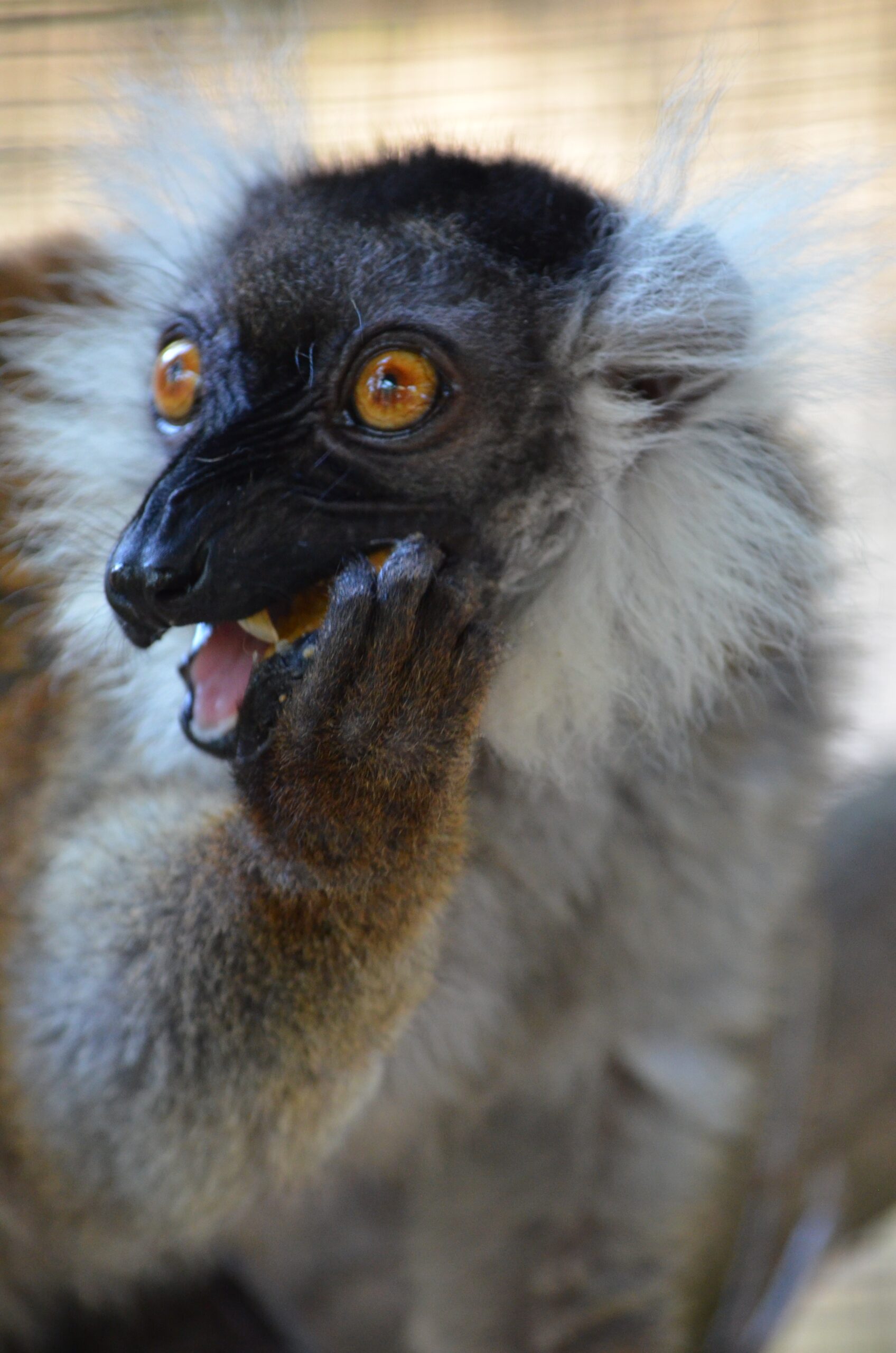 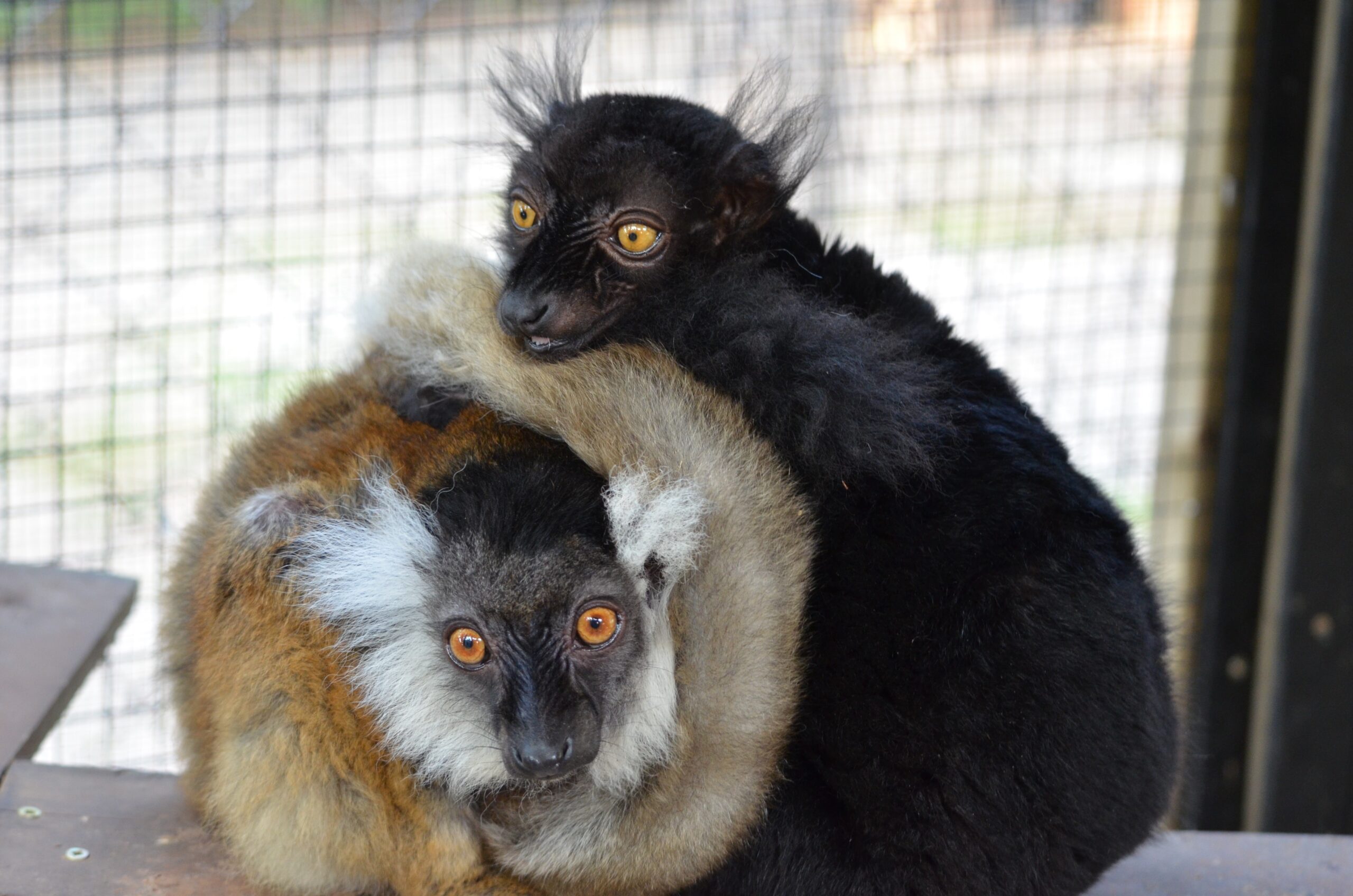